The Norman invasion of England. It seems like the perfect topic to approach with gaming. It’s history, it’s dramatic, and best of all it’s about battles.

The game was developed by Preloaded and published by Channel 4, to go along with the drama series of the same title.

I’m a huge fan of Channel 4’s adventures in gaming, so when I heard about this one I was intrigued – Channel 4’s previous content in the gaming dep’t has been great. This game looks and sounds great, and it’s an ambitious project (one word: multiplayer!).

I was looking forward to wreaking havoc on the English in the first level . . . Then I got confused by the game space and stymied by strategic dead-ends.

1066 looks beautiful, but as a gameplay experience it doesn’t quite make it, mainly due to poor game design. 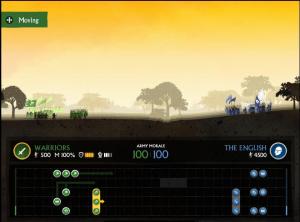 This is innovative, but confusing at first – it took me a while to work out how the silhouettes related to the strategy map. When a unit is moving or fighting, the upper view zooms in on it, while the unit’s counter flashes yellow in the strategy view. This is a very subtle effect, though, and it took me a few battles to notice it.

In 1066 The silhouettes provide the game visuals, but the gameplay actually happens in the map view. The overall impression is a strategy game in uneasy cohabitation with a flash animation in the attic. Dispensing with the silhouette view entirely, and actually animating the counters on the schematic, might have been clearer.

Way back in ’92, Dune II (and its sucessor, the original Warcraft) proved that 2D, top-down real-time strategy worked as a game genre. It’s a proven template, whose dynamics could have been adapted and tweaked to better reflect the historical realities of field warfare in the 11th century.

The individual unit battles are resolved through a timing-based minigame. You have to hit the correct arrow key at the right time to get a combat bonus. But there’s no penalty for hitting incorrect keys – so the dominant strategy is to frantically mash every arrow key as fast as possible, which guarantees a maximum bonus every time. Unfortunately, the existence of a dominant strategy eliminates the need for skill, so melee combat feels rather flat.

On the strategic level, precise maneuvering isn’t possible, because the game space isn’t very high-resolution. This leaves the player with few interesting decisions to make. It is possible to outflank the enemy, but only just. In itself, this wouldn’t be a problem, if the actual combat mechanic was fun and interesting. But since there’s a dominant strategy on a tactial level, there’s really not much to do throughout the battle but run your counters into base contact with the enemy, mash the arrow keys, and wait for the computer to resolve the attack.

Bottom line: the player’s sense of control is eroded.

On the Plus Side

The graphic and audio design is great. Aesthetically, this game is tops – as you’d expect from the pros at Preloaded. The blood splashing on the screen during melees is a really nice touch.

Alice Taylor and Matt Locke have been doing great things in public service gaming.  Their decision to make a big push into games in 2007 has been paying off with high-quality titles like Bow Street Runner. The suite of games they published for Routes, their DNA season – Breeder, Sneeze, DNA Heroes and Ginger Dawn – were fun, snappy, and aesthetically slick. They are blazing new ground, and doing it well.

Preloaded has some great sucesses on their hands, too – Launchball, for instance, was a totally fun puzzle game that managed to teach scientific method along the way. I loved it.

With a few more iterations of playtesting, 1066 could have joined its siblings in the Pantheon of Awesomeness.

What happened? Chalk it up to a learning experience . . .